The Roscoe Trophy is Lancashire’s flagship club doubles knockout competition.   Clubs from all over Lancashire are eligible to enter and the standard of tennis in the later stages is extremely high.

This year we played Bellingham Tennis club in the final:­ a strong team who included this year's men’s county championship singles champion alongside other very experienced club players of a high standard.­   The match was incredibly close:  our no 1 pair - Charlie Hutchings and Alex Moore - narrowly lost 11-9 on a match tiebreak against their 1st pair;  our 2nd pair Jamie Hutchings and Ben Crichton won convincingly against their 2nds 6-0 6-3.

The match was 2-2 on rubbers so it is then the team who has won the most sets and games that takes the title and we were well ahead on those statistics.

The team played really well and received great support throughout the competition.

This year's win of the Roscoe Trophy is dedicated to the memory of our dear friend, Ian Broughton, who would be proud of the Club's achievement and the support shown. 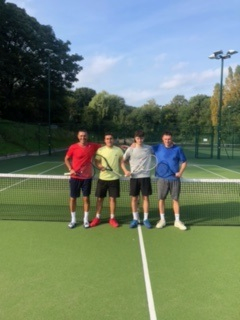 Posted in Club News, Results and Fixtures on 2nd October 2021